We all meet someone who inspires us. For me, one of those people is Kevin Wilke. 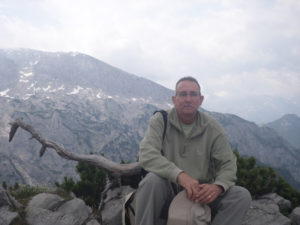 I got to know Kevin when telling his story for a Cleveland Clinic Florida oncology publication. Kevin is battling the most common and aggressive type of brain tumor known as a glioblastoma, but thanks to Clinic Florida experts he achieved remission and wanted to share his success.

After two surgeries, chemotherapy and radiation, Kevin had resumed a life rich with family and friends. But, brain tumors are ominous and his returned with a vengeance. Any further surgery was ruled out; additional chemotherapy and clinical trial drugs are now the only option.

While this may seem a sad story, Kevin thinks he is lucky. His experience is a chance to help others, and educate those who can make a difference—particularly when it comes to the topic of drugs needed to treat the critically ill and their costs. I was honored he called me to help spread the word; even more so because my mother had lost her life to a glioblastoma.

The news about prescription drug costs in the United States gets worse each day. Drug costs here are three times more than the same top 20 selling medications in Great Britain, making our country the most expensive place in the world for medications. Why? Medicare is banned from negotiating drug pricing under the 2003 Medicare prescription drug law. This means even those with health insurance are affected by high cost, especially if a generic drug is not an option for the best outcome.

Adding insult to injury is that about a third of cancer patients must borrow money from friends and family to afford treatment, according to new statistics that also show cancer patients are 260 percent more likely to file for bankruptcy.

President-Elect Donald Trump is calling for the repeal and revamp of the Affordable Care Act that includes several new measures that could affect the pharmaceutical industry. His plan includes calling for the importation of cheaper drugs manufactured offshore and allowing the federal Medicare program to directly negotiate the price it pays for drugs, which would introduced a competitive bidding process for federal drug purchases.

For now, the type of drug Kevin and many others rely on is among the priciest. Avastin (bevacizumab) is a “specialty tier” drug—often referred to as “Tier 4” drug. These life-altering drugs increase the patient’s responsibility for cost. Kevin’s wife tells me his dose of Avastin every two weeks ranged from $35,000 to $40,000, depending on his weight and the cost, both of which increased while he was on it.

In addition to the cost is the issue of waste. Often, drugs given intravenously, or through a vein, are dosed in a way where much is wasted. Avastin comes in 100 total millimeter (mL) of 10 mL units. This means that any dose that isn’t a factor of 10 is wasted when opened. In Kevin’s case per his weight, he received 104 mL at about $35,500 per dosage with the extra six mL thrown away—but he was charged the over $2,000 the extra amount wasted. To understand the overall cost, the 19 Avastin treatments Kevin received has totaled $722,000.

This made Kevin think there has to be a better way—both to reduce costs and utilize waste to help others.

As Kevin faces the biggest battle of his life, here is what he wants you to know—both those who are facing a critical disease diagnosis and minds with ideas to help make a difference for the future:

The answers for reducing drug costs and providing a solution for utilizing drug waste for the greater good aren’t simple. If you or someone you know can help make a difference, let me know. I’d love to continue this story—and so would Kevin.

Beth A. Kapes is Founder & President, Moving Words Into Action, LLC. She loves telling the story that makes a difference! Contact Beth to tell your story at beth@mwaction.com, or give her a call for a real conversation at 440.773.5324